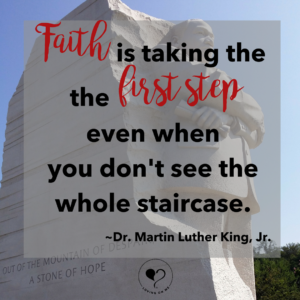 Dr. Martin Luther King Jr. was one of the greatest civil rights leaders the world has ever known. With a strong moral compass, a genuine love for people, and an unerring commitment to racial and economic justice, he led a non-violent movement that “achieved more genuine progress toward racial equality in America” than the previous 350 years had produced.

What’s most astonishing is that he did it in less than 13 years.

Dr. King died when he was 39. Assassinated in the prime of his life, his passing left a void in social justice that the world has yet to fill. The courage with which he spoke truth to power, while standing strong against inequality, often at great personal sacrifice, is an act that was and still is a rarity.

But if you listen to his words carefully, you’ll quickly realize this was his central charge to us.

Dr. Martin Luther King Jr. was a man with a vision, and a plan. He didn’t just dream of a better world. He embodied a CAN DO spirit that compelled him to act, and the world became a better place when he inspired others to join him.

He was a man focused and on fire for justice. I can’t help but wonder…what would he be doing if he were here today? What role would he be playing? Would you join him?

Dr. King’s movement of activism, equality, and love remains as powerful and relevant today as it was 50 years ago. The threats to justice we face are enormous, and often seem insurmountable, but we cannot let them paralyze us with fear, frustration, or confusion. We must organize, speak up, and stand against inequality and oppression – in all it’s forms.

Below are a few of Dr. King’s quotes to inspire us to aspire higher, believing that what we can do will make a difference. Let us be strong leaders that unapologetically stand for equality. Remember… 'We may have all come on different ships, but we're in the same boat now.' Click To Tweet

It is our time to lead. May Dr. Martin Luther King Jr.’s words encourage us to persist until we succeed.

12 Quotes from Dr. Martin Luther King Jr. that Inspire us to Take Action