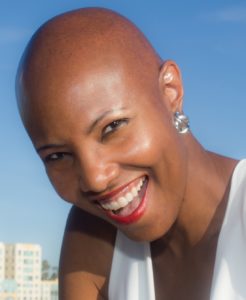 Cheryl Ash-Simpson thought after years of climbing the corporate ladder and being an overachiever, she had it all. She had a wonderful career, a gorgeous daughter and had finally found the love of her life. But that perfect image of having it all was shattered just three days before her wedding when Cheryl received the news she had Stage IIA breast cancer.

Cheryl had recently gone in for a mammogram and thought little of the abnormal results. Her prior mammograms had shown suspicious or abnormal masses that had always turned out to be nothing. She assumed, like in the past, once checked out, everything would be okay. So being the “A” type personality she is, she went about the business of planning her wedding. Imagine her surprise when four devastating words – you have breast cancer – stopped her cold in her tracks.

“I was upset and in shock. Man I can’t believe this,” she thought. Then she pulled herself together thinking I’ve got to get through this. She thought about all the things she wanted to do and had left to do in life. See her daughter graduate. Marry the love of her life Richard and hopefully see her daughter one day get married. She asked herself, is this it? Has my script been written? No, absolutely not she thought. It was at that point Cheryl pulled herself up off the floor and decided right then that she still had a lot to do, and that she would follow doctors’ orders no matter what.

They say attitude is everything. And when it comes to fighting breast cancer, it may be almost as important as treatment. You definitely find out how strong you can be. After getting over the initial shock of the news Cheryl said with a prayerful attitude, “Cancer will not beat me. I will beat cancer!”

Cheryl then thought about how she would tell Richard just days before their nuptials. She had a hunch as to how he would react, because of the man he had already proven himself to be. Turns out that she was right about him and the strength, comfort and support he would bring.

When Richard was told, his first words were, “What’s next? How do we treat it?” He said people would ask him why he did it. Why did he go through with the wedding and not back out when he still had the chance?

“It never entered my mind to call off the wedding,” he said. “I think that’s cowardly.”

Richard pledged his undying love and support six years ago and continues to encourage his beautiful wife today, as she continues to struggle with hair loss from past treatments. For Cheryl, as with most women your hair is everything. As a result of hair loss, Cheryl has completely shaved her head twice and indulged in a variety of wigs from short, long, sassy to conservative depending on her mood, but it is her bald head that her husband loves most.

“You are a breast cancer survivor. It’s a badge of honor,” he said. “I think it’s a testament. You shouldn’t hide that.”

Everyone goes through some type of adversity in life. During her treatment, which had complications and pain that the doctors didn’t count on, Cheryl never gave up faith. She believed that no matter what she was going through she could get through it with prayer, faith and family.

She did! Cheryl now considers herself exceedingly blessed as a breast cancer #survivor. And as a part of her healing process she decided to not only share her story, but document the journey with a film called Sunshine Noodles and Me.

“I decided to tell my story in a way to let everyone know that you can overcome breast cancer or any adversity and continue to thrive and enjoy life.”

Sunshine, Noodles and Me chronicles Cheryl’s treatment, hair loss, and her new lease on life in a country, far, far away after her new husband took a new job that moved them to Malaysia. The documentary was shot on location in Malaysia, Singapore, Indianapolis and Dallas.

A testament to Cheryl’s strength and outlook, she assures those dealing with cancer that “no matter what you’ve gone through, what you’ve done, you can come out on the other side smiling.”

“You can win as long as you keep your head to the sky. Be optimistic.” Sounds of Blackness, Optimistic

To the women and men who have just been diagnosed Cheryl says, “Don’t give up! It’s not over until it’s over.” She also encourages others by reminding them that, “God is good. You can get through anything.”

Visit Sunshine Noodles and Me to reach out to Cheryl or to learn more about her #survivor story and her courage to overcome. And in honor of Breast Cancer Awareness month share your thoughts and powerful words of encouragement with us and the Loving On Me tribe.