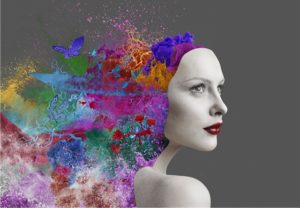 Today marks the 2nd Anniversary of Loving on Me. It’s been an amazing adventure on a highly improbable path. Mostly because when I started on this journey my vision was not to create a blog.

There was nothing in me that screamed, Oh please God let me lay out my insecurities for the whole world to see. I want them to know about my abusive marriage, climb to get out of debt, addiction to sleep aids, and struggles as a single parent. Let them see the real me – flaws, failures and all.

Um…no. That’s not quite how it went. Left up to me most of my stuff would have stayed within the recesses of my mind, going with me quietly to my grave. But God…He had other plans. He used one of my greatest struggles – learning to love myself as I am and accept me as enough – to birth a vision that resonates with women around the world.

Isn’t it interesting that God can take what we think is our worst, and use it for His best? I hear examples of this over and over, but until I experienced it I would not have guessed it to be true.

Our calling is often birthed out of crushing pain – life interrupted moments, when God has our complete attention, and we can do nothing but depend on Him.

It’s a humbling experience, when you feel like you’re at your lowest, and God asks you to bare your soul. It feels rather like running through Times Square naked as tourists stand by gawking and taking pictures. You cannot imagine what God is thinking, but you’re out here now, so you may as well trust Him, and see what happens.

…And that’s what I decided to do.

Man, were those first few blogs hell to write. I can chuckle about it now, but I used to fixate on every word, trying desperately to be profound. I knew I had no credentials – no license to be a life coach and no degree in psychology. Why God would choose me for this message, rather than someone infinitely more qualified, was beyond me.

Finally, I gave up and decided just be myself, and let that be enough. It took me months to figure it out, but in the end that’s all people wanted anyway.

As more and more women started connecting, I realized that I needed help. I wasn’t one of those people who could write everyday, and truthfully, I was tired of hearing my own voice. So I invited other women to share their stories, giving us all a fresh perspective.

Well, the first thing that happened was some of the writers I asked to join me became more popular than me. Their articles were viewed more often, and I was so jealous. I became obsessive about the numbers, secretly competing to try and get more page views.

Surprised aren’t you, that I could be so ridiculously petty? Yeah, I was to. But God knew there were some things I needed to work out before He could take me to the next level.

You see, what I was feeling…it wasn’t about them. It was about me, not yet feeling secure about whom I was. Truthfully, that’s what happens to a lot of us.

We wonder why God won’t let us move forward, why He won’t expand our territory, or reveal the vision for our future. The reality is, we’re just not ready.

Our vision for our lives, the one we were destined for before we were born, emerges in direct proportion to our maturity to handle it.

Once I got over myself – and trust me it took a minute because I had to first acknowledge it was happening – I got grateful. I became so incredibly thankful for the women who were willing to share parts of themselves with us, who believed in the mission of the blog, and were gracious enough to stand beside me as things evolved.

Once I had the right perspective I realized Loving on Me was not meant to be just a blog. While I was whining about how many people had read my article God was at work creating a platform on which a global movement, caring community and a business could stand.

Suddenly, I could see the vision so clearly – books, products, videos, and retreats. Excitedly I drew it all out. There was only one small problem…I didn’t know how to bring it to life.

It was so BIG! How was I going to get from where I was – which was a blog with less than 2k views per month – to a global movement that reached millions? It seemed impossible. But God…He of course had a plan.

See here’s the thing I’ve learned about a vision. It’s different from a big idea. We can come up with those on our own. They’re generated from what our conscious minds can conceive, and our intellect can envision.

But true visions come from God. They’re big, audacious and don’t come with an instruction manual. Instead they come with three basic commands:

-Believe what I have shown you.

-Trust me to give you everything you need.

Well, if you’ve read any of my previous posts, you know waiting is not in my nature. That whole “as they appear” part has been a real struggle for me. I’m like the little kid who perpetually asks, are we there yet???

But now that I’m two years in, here’s my latest observation:

Our success and peace of mind lies in our surrender to Divine timing and will.

I do not have all the answers, and I am not supposed to. Whew! Thank you Jesus, Mary, Joseph and ALL the Wise Men. I can finally take my cape off and use it as a sail for my little boat, rather than trying to be a super hero.

And where do we go next? Only God knows. Things are cooking, and even more are being prepared to go into the oven, but only He knows what will be done first.

That used to drive me absolutely crazy, until I surrendered to His will. Now I just work where I am, and when the next step appears, I take it.

My prayer for you is that you do the same. Don’t be afraid to say yes to God, to embrace the bold vision He speaks into your spirit, and to accept the peace only He can give when you surrender to Him.

Remember, you don’t have to know how, just who.