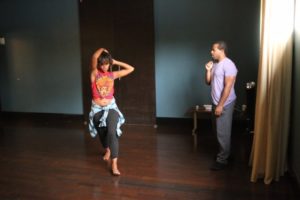 It’s crazy how life can take you on some of the wildest twists and turns before you find the answer to what you really need to do. Well, I’d have to say 2015 has thrown me through some loops, but the answer that came from it all is learning that “it’s not in my timing, it’s in His”.

In my last blogs, you learned about who ShirJuanda “Bounce” Woodson is, a “God-fearing woman, achieving her goals and aspirations”, and I’m still here, but I just can’t wait to tell you all where God has placed me in life now!

When we last met up, I was headed back to Texas from a year in New York dancing and training with the prestigious Joffrey Ballet School. At that time, there were things I wanted to happen and things God said needed to happen, but of course I was stubborn and stuck in my ways. Well, I finally listened. I moved back to Texas, registered back into TCU for the 2014-2015 school year and it came with some amazing life lessons. In August of 2014, my pastor, Pastor Bryan L. Carter of the Concord Church in Dallas, Texas, had a back to school prayer service for all students of all ages. I knew something was burning inside of me, telling me this was my time, but I just didn’t know what that burning sensation was yet.

On that day, Pastor Carter said a prayer over all the students and opened the floor for anyone who wanted to dedicate their life to Christ. I looked at my mom with tears in my eyes and said, “Come on, I’m ready to rededicate”. On August 24th, 2015 my life was forever changed, and I started seeing life fall into place.

Here we are, a year later and man, have I received so many blessings! During spring break, I took a leadership trip sponsored by the Roy Group to Victoria, Canada were I learned a lot about myself and those who took the adventure with me. I’d have to say the greatest thing about the trip was learning the leadership skills, but what was even better was coming out with three amazing badges. After a week of training in small groups, one-on-one groups and participating in many activities, we all received badges for: “Opportunity in Conflict: Engaging Difficult Conversations”; “The Leader’s Discipline: A Coaching Approach to Leadership”; and “Focus on Self: Exploring Personal Leadership and Development”. This trip has changed my whole perspective on my life and career.

After coming back to school from spring break and celebrating my 22nd birthday, I received a call from the owner of Millennium Dance Complex, Dallas, a franchise from the well-renowned Millennium Dance Complex in Los Angeles, California wanting to hire me, yes I said ME, to teach at their studio. I applied to work at Millennium in October and definitely forgot all about it. However, they didn’t forget about me. To be asked to teach at a studio with such a grand name was breath taking. I didn’t know what to do but look up and say “Thank you, God.”

Well, a few months went by, we did the grand opening for Millennium and God placed something on my heart. As I looked around at all the students I have had the privilege of working with, and looking at the dance community around me, I saw some things I knew I wanted to change. Any dancer knows that the dance community changes daily, new styles are invented, new artists are jumping on the scene and more opportunities arise, but most of all, the training continuously grows. I began to think of one of my favorite quotes, “Aspire to Inspire before you Expire”, and it made me think of the influence in my teaching I wanted to have on my kids. So I decided not to teach this year, and yes I was sad to let go of Millennium, but the Lord had better plans for me.

So I am now focusing on my performance career. In the future, I want to be able to tell my students that I experienced what I am teaching them, giving them the ins and the outs, letting them know that it takes working in the business to be able to tell people how to be successful. I auditioned with Eclipse Entertainment, LLC for the State Fair of Texas dance shows soon after and was blessed to be cast for, not one, but two of their annual shows for the State Fair. I also landed a role as a choreographer for one of the shows and was cast in the Red, White, and You Coca- Cola show.

I am so blessed in the decision I made after many prayers and asking God for guidance that a bigger blessing headed my way. I planned a getaway training trip in August to go to Los Angeles and prayed to God that I would have an audition while I was there, and He had something better planned. I was set to head to Los Angeles on August 22 and as I sat on Instagram doing my daily scroll, I ran across an audition for The Movement: Talent Agency in Los Angeles having auditions Aug. 12. My heart dropped. I said, “It would be ten days before I leave.” I was devastated, but I knew for a fact I wanted to make that trip happen.

So I took a screenshot of the flyer, I posted it on Facebook as a joke (not so much a joke in the back of my head) and I said, “If someone sent me to this, I promise it would be worthwhile”. Five minutes later, a guardian angel was sent my way. A dear family friend and dance brother asked me to call him. He asked me what my goal was and told me, “I will buy your flight. Send me your reel, and when you get out here, show out”. The next thing I know, a week later I am at the audition in Los Angeles.

We began the adult Jazz audition and immediately we got to work with the amazing Jackie Sleight. Jim Keith, the President of MTA, made it very clear, ” If you don’t make it through, either we already have your “type” or you just weren’t good enough” and I knew right then it was time to show up and show out.

I made it all the way through and was on to the next audition, the adult hip-hop with the prestigious Tina Landon. If you don’t know who she is, look her up. It will blow your mind.

The audition was PACKED. Immediately, we were separated into groups by “type” and I knew this was my time to shine, because I was in a group with the “sistas” and we were all fighting for the same spot. After two rounds, I am proud to say I made it all the way through. After three hours of auditioning in two different genres, the president of The Movement said, “Don’t call us, we will call you, 2 weeks”. The nerves and anticipation kicked in and I was headed back to Dallas the next night.

Well, on August 19th I received the call from my agent asking if I would like to be represented by none other than The Movement: Talent Agency as a dancer and I gladly accepted the offer. I am now a signed and represented Professional Dancer for The Movement: Talent Agency. If you remember in my last blog, I was anticipating moving straight from New York to California, but God lead me another way. Well, I am proud to say on October 25th, 2015 I will be headed to Los Angeles, California to fulfill my career as a professional dancer, while still in school online at Amberton University studying for my Bachelors of Science in Human Relations and Business, which I plan to use in the near future opening up a studio for all of the arts. But of course, first I will travel the world touring, dancing back up, doing music videos and living life.

What I want to share is this: remember to never look at your life, wishing you had done something in the past that you think you will regret in the future. Chase your dreams. Never stop fighting. What God has planned for you is for you, but faith and belief will take you further than you ever know. I soon learned when I stopped taking control of my life and allowed Him to lead the way, things began falling into place.

I told myself on my 22nd birthday, my goal for this year of life would be, “22 Dreams Come True”, and look where I am now, choreographing and dancing at the State Fair of Texas for Eclipse Entertainment, working an amazing job as an Operations Assistant, in school, and now a represented professional dancer.

IT WAS ALL IN HIS TIMING…NOT MINE.

THIS GIRL IS L.A. BOUND!

ShirJuanda "Bounce" Woodson is a 21-year-old Texas native currently pursuing her dreams in New York at the Joffrey Ballet School's Jazz and Contemporary Trainee Program. After taking her first dance class in elementary school she soon came to find that dance is who she is. ShirJuanda has danced for 16 years, and has danced with many professional instructors from Debbie Allen, Chloe & Maud Arnold, Madame Adrienne Dellas, Joffrey Balland the Alvin Ailey Dance Theater just to name a few. If there is one thing ShirJuanda stands by as she continues to pursue and succeed in her dreams, it is that " She Dreams and Dreams Come True".