I can hear the tune in my soul:

I can sit in silence and hear The Impressions singing that tune. It’s a part of my fabric. A part of my musical DNA. It punctuates my history. Our history.

You know, I often wonder if today’s children know the difference between Black History and American History? I live in hopes that the answer is a resounding “no” because in reality, there isn’t a difference. My history is yours and yours is mine. Our history is one. Our history is rooted in the truth, an intermingling of the achievements, failures, joys, sorrows, blood, sweat and tears of us all. It’s often been said that there are three sides to every story, my side, your side and the truth. Pay no mind to attempts at distortion of our collective truths because ultimately, “Whatever hurts my brother, hurts me. Whatever helps my brother, helps me.”

Why the word “truths” versus “truth”? Well, I’ll tell you. Most simply stated, it’s because our paths and life experiences vary. Think about your journey through life. It impacts how we each retell the story of what we’ve witnessed. It also impacts our level of sympathy and whether or not we are capable of living vicariously, and seeing, through the eyes of those who exist alongside us. Let me share a few examples.

Example 1: I’ve heard accounts of history that say in 1920 “all” women were given the right to vote (and supposedly African American men even earlier). However in truth, many of us went to the polls and were not allowed to exercise that right. Backing up from there, many of us were not even allowed to register. The inspirational movie Selma documents this and gives a pretty accurate account of what transpired on the journey to true voting rights. So many of my people, OUR people (not just blacks), died to exercise the most basic of civil rights as recently as the 1960s; beaten bloody, shot, bitten by dogs and gassed for simply seeking equal rights for us all. Our nation loomed near a proverbial cliff and a change was imminent. So, why do some recognize that the barriers to voting for all African Americans weren’t truly removed until the 1960s while others think it occurred in 1920? It’s simple. There’s a variance in truths based on the experiences of you and your family versus the experiences of others. It’s difficult to teach what you didn’t learn or live.

So what brought on this imminent change in America? A tipping point is defined by Google as “the point at which a series of small changes or incidents becomes significant enough to cause a larger, more important change”. The unyielding persistence of civil rights activist, Annie Lee Cooper, Bloody Sunday, the 1968 assassinations of Dr. Martin Luther King, Jr. and President John F. Kennedy and the eventual passage of the Voting Rights Act all edged us towards the tipping point, which shifted our society from a barrage of blatant acts to more hidden ones.

Example 2: I spent a large part of 2014 allowing frustration to settle into my spirit as I drew parallels between the Civil Rights Movement of the 1950s and 60s and what we are now witnessing decades later. We reached a tipping point in 2014 with race relations in America. A dialogue that had been brewing just below the surface for decades, pierced the silence and refused to be ignored. Was it an awakening of our social consciousness? Both inspired and hesitant, proud yet afraid, of our direction as a nation leaves my soul silently humming the songs that were the soundtrack of the Civil Rights Movement. Much like the right to vote for African Americans existed on the books in the early 1900s, but didn’t exist in reality for those who continued to fight for that right, Eric Garner’s death has shown us that simply making something a law doesn’t make the freedom that that law provides accessible to everyone. Why the disagreement on this verdict? Again, it’s a variance in your experiences and what you’ve been taught.

Yet, together, we carry on. The beauty of our struggles can be found in the diversity of the hues of faces and arms that lock up and join forces to fight for justice, equality and peace. Common raps in the song, Glory: “They marched with the torch, we gone run with it now.” He says, and I agree, that “The biggest weapon is to stay peaceful.” I’m moved by his positioning of the inter-generational need we have for one another. Simply stated, “No one can win the war individually. It takes the wisdom of the elders and young people’s energy.”

Example 3: U.S. Representative John Lewis’ continued strength and presence in 2015, the shoplifted lives of Eric Garner and Trayvon Martin which will forever remain unpaid for, combine to represent today’s tipping point. If you’re like me, this reality makes you want to sing alongside Sam Cooke:

He goes on to sing:

“There’s been times that I thought I couldn’t last for long. But now I think I’m able to carry on.”

Those words serve as inspiration to us all. You see, how people feel about leaders like Representative Lewis’ leadership, and the great divide in how individuals felt about the verdicts handed down in the cases of the defendants of the Garner and Martin cases, is simply based on a variance in life experiences and what’s been taught and handed down in generations of families.

Despite our differences, Frankie Beverly and Maze sing, “We are one”, and that my friend, is the real truth. And here we are! My spirit is so full right now; memories, the songs of a movement and Selma, a movie that reminds us of our strength and intertwined history together. You see, I saw this movie long before I saw this movie. I sat at the feet of my grandparents and great-grandparents who put the stories in my heart which became cinematography in my head.

Now, while I recognize and respect that all people won’t feel my passion because everyone didn’t grow up the way that I did and where I did, I hope that as a people, we can fortify the value that we place on diversity for that very reason. I’m proud of my beginnings in Albany, GA. You’ll hear remnants throughout the movie about my home. That’s where Dr. King and company learned from their mistakes and reassessed the strategy which would make Selma a success. I still keep my grandfather’s mug shot from his many nights in jail because he marched for my rights and those of others. He understood that his suffering was not in vain. He knew that he and those he locked arms with, were demonstrating leadership in its purest form- influence. Their sacrifices influenced the greatest change that this nation has ever seen.

We all come from various backgrounds, but we’re locked in a symbiotic relationship, no matter our truths. What will be the chorus, refrain, bridge and melodic memories left by the hotbed of this generation’s Civil Rights Movement? What will future generations read by your name in the credits? Do something to drive positive change, otherwise your silence implies consent. Continue to expand your circles to include others who don’t look like you; love as if you are colorblind. We’re writing history.

In closing, the beauty of both the movie Selma and the movements that I see forming today, is the feeling of empowerment that you’re left with. You don’t walk away angry. You walk away loving everyone around you. For indeed you realize that through collective action and unity is the only way that progress is probable, possible and imminent. Selma is a reflection of what it will take to overcome the modern-day injustices of 2015. Carry on the truths of our collective history as the dialogue for future generations. “Forward ever, backward never.” 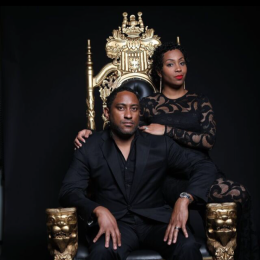 is a proud wife and mom who draws her energy from loving her family. She is committed to making a difference through supporting and empowering others. Crystal is Director of Multicultural Marketing for the American Heart Association, working to raise awareness of the risk of heart attack and stroke in diverse communities. She’s also a true food connoisseur, spending her limited spare time indulging in cooking, baking and dining out with friends and family.