I started out in the wrong track. Dropped out of high school, lived a fast life, suffered from low self-esteem, attracted abusive relationships and even abused. I was intent on ruining my life.

I decided to relocate to Dallas with family 14 years ago to take a break and find a new beginning. I was given an opportunity to work for MAC cosmetics on a fluke, which lead to a very successful makeup career. Even though I managed to escape the streets, I still indulged in destructive behavior.

Despite the amazing opportunities I was given, I still wanted to live like a rock star and date the bad boys. All of my focus was on the exterior. Things like cars, clothes and cash defined someone in my eyes. The meaning of true love was unknown to me.

My life took a dramatic turn 8 years ago. I fell ill from an amoeba I contracted from eating sushi. I developed disfiguring hives, which were not only embarrassing, but extremely painful. At times I was unable to walk because my joints were so swollen. The doctors failed me. They said that they couldn’t find the cause. My hair fell out, my body bloated, my skin took on a grayish cast. The looks I once used to get were diminishing. The suitors that constantly pursued me were gone. I began to realize my friends weren’t my friends. I found myself in a very dysfunctional and abusive relationship.

Ironically my career was flourishing. The opportunities rolled in, from working on celebrities, productions, politicians, tours, red carpet events, cruises, you name it! Instead of being absolutely thrilled, I worried, afraid I would die or my body would shut down. The money I was making was spent on trying to get well. My body screamed in pain as I pushed myself to perform and smile. I tried hiding my hives with long sleeves and leggings. I tried distracting from them with hair and makeup.

Often times they would show up on my face, the very face that was supposed to represent beauty to my clients. You know what? Very few ever noticed the hives. People are often blind to others pain. We are so absorbed in our own vanity we don’t see others.

At that point, I realized what it is like to be on a platform, but still invisible, caught up in a physical world based on money, fame and looks.  Since my looks had declined, I tried making up for it with big personality. My popularity bought new friends, but not true ones. I began to give up hope. I felt as though I deserved my fate. At this point, I wanted to die.

Something deep inside me said you’ve tried everything else. Why not try God? That was the last thing I wanted to do. See, I grew up church hurt. From overzealous parents who were too strict to “dirty deacons” and pastors. I vowed as a teen to never attend church once I was grown. I realize now that Satan has never wanted me to be aligned with my Father. Satan knew the gifts YHWH (Yahweh) put in me and fears them being used for God.

Returning to my breaking point or breakthrough, I sought The Lord. I began to learn His ways, His love. It inspired a love within myself that I never experienced before. I restored my value. I began to change my life style, raised my consciousness and  exercised discipline.

I learned about healing on several levels. I learned about the toxic foods we eat. It surprised me what our government allows food companies to sell us. The GMO’s, chemicals and contaminants we consume, from inorganic and processed foods, are what are causing so many ailments in our society. Foods that were considered unclean biblically are now considered delicacies. I sought alternative & holistic medicines because the ones that were prescribed to me worsened my condition and even caused new issues. I learned about the power of positive thoughts. I learned how to love. Most importantly, I learned to forgive. As my spiritual healing took place, so did my physical. My hives are under control. And my beauty has been restored.

Today, I am a business owner. I developed a line of natural minerals that heal the skin. My career as a makeup artist continues to flourish. I have credits from all of the major production companies. I’ve done Oscar winners, Olympic gold medalists and even worked alongside Michelle Obama for a PSA with Team USA. Most importantly, I now live to be an example of transformation, from the way I give back to the way I worship.

Even though this has been a long and painful journey, I would not trade it at this point. I thank YHWH (Yahweh) for my affliction. He used pain to draw out my true beauty. Without the Lord, I would still be without consciousness. I wouldn’t have my story to share with those who are broken. Others wouldn’t be healed through my experience. Though He is not through with me yet, I know that YHWH (Yahweh) has brought me this far. 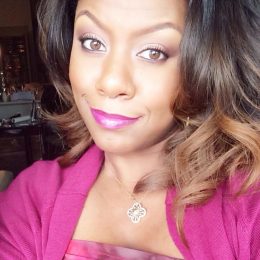 is a celebrity make-up artist, creative director and business woman who wears many hats. In her 20+ years in the fashion and beauty industry, she has a built an impressive resume as a celebrity makeup artist. Her artistry has been seen in TV, film, print, and on international tours. She is known for her gift of creating glamorous yet soft looks. Considered a master makeup artist, she teaches and develops other artists launching their careers through her Pro Makeup Academy. Bridgett has a broad clientele spanning from corporations, celebrities, socialites even to the Olympic Team USA. In 2010, Bridgett developed a cosmetics line Glamour Rx. She has over 250 sales reps and recently launched her retail division.

It’s hard to grasp the scope of her talents as she has also added writer and speaker to her repertoire, landing a job as a freelance beauty journalist for Heart and Soul Magazine and various other publications. Also standing as a speaker for God’s Leading Ladies at the Potters House Dallas. She serves in her community by speaking to women of all ages about realizing their dreams by sharing her personal story.