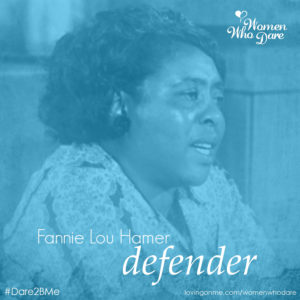 Famed Civil Rights Activist Fannie Lou Hamer changed the way the nation viewed democracy. In her 1964 televised speech to a Committee of the Democratic National Convention, Fannie shined a spotlight on the miscarriages of justice that were common throughout the south as African-Americans tried to register to vote.

Born Fannie Lou Townsend in Montgomery County Mississippi in 1917, she was the youngest of 20 children. Her parents were sharecroppers in the Mississippi Delta and by age six Fannie was already working in the cotton field. About the 6th grade she dropped out of school so that she could work full-time to help support her family.

On the plantation where she worked, she met her husband Perry Hamer. Together they would continue sharecropping until a fateful event in 1962. A group of volunteers from the Student Nonviolent Coordinating Committee (SNCC) came to town to hold a voter registration meeting. Fannie decided to attend, and to her surprise learned that African-Americans had a constitutional right to vote. When they asked for volunteers to go to the courthouse and register, Fannie was first to raise her hand. She was 44 years old.

This was a dangerous decision, and many had been killed for less. As Fannie later reflected on it she said, “The only thing they could do to me was kill me, and it seemed like they’d been trying to do that a little bit at a time ever since I could remember.”

Her courageous act got her jailed, beaten and along with her husband thrown off the plantation where they had lived and worked for nearly two decades. But Fannie was not to be deterred. According to the New York Times she said, “They kicked me off the plantation, they set me free. It’s the best thing that could happen. Now I can work for my people.”

Fannie dedicated her life to fighting for civil rights, becoming a SNCC field secretary and traveling throughout the country speaking and registering people to vote. She also co-founded the Mississippi Freedom Democratic Party, which was established in opposition to Mississippi’s all white delegation to the Democratic National Convention. The following year she ran for Congress in Mississippi, but was unsuccessful in her bid.

In addition to her political activities, she also worked to provide opportunities for financial independence for poor blacks. In 1969 she helped start Freedom Farms Corporations, which lent land to black farmers until they had enough money to buy it. She also worked with the National Council of Negro Women, organized food banks, and helped convene the National Women’s Political Caucus.

Fannie Lou Hamer was an inspiration to many involved in the struggle for civil rights. She made up her mind that she was done waiting for her due, and is known throughout the world for her famous words “I’m sick and tired of being sick and tired.”

For her defense of the rights of the poor and demands for democracy for all, we are proud to add her to our list of Women Who Dare. Her bravery encourages us all to fight for the ideals we believe in, and to be tenacious in our pursuit of justice.

We can all learn so much from Fannie’s courage to be the person God created her to be! Are you willing to do the same? Will you dare to use your voice to speak up for the rights of the poor and oppressed?

Leave a comment below telling us how you’re working to make our world a better place. We believe in your power to make a difference! Do you? Hugs and Blessings ❤