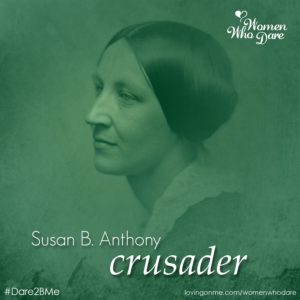 If you’re a woman who exercised your right to vote in an election recently (hopefully you did), thank anti-slavery and women’s rights activist Susan B. Anthony. Credited with birthing the women’s suffrage crusade, Anthony, along with her partner in the movement, Elizabeth Stanton, arranged for Congress to be presented with an amendment giving women the right to vote in 1878.  This later became the Nineteenth Amendment to the U.S. Constitution in 1920.

Coming from a Quaker family that was passionate about social reform, Anthony’s father encouraged all of his seven children, girls as well as boys, to be self-supporting at an early age. One of her brothers fought with abolitionist John Brown against pro-slavery forces and Susan was a life-long friend of freedom fighter Frederick Douglass.

Known to be fearless in her pursuits, she also fought for blacks to attend public schools and colleges, called for males and females to be educated together at all levels, and the right for women to speak in public settings. In response to opposition against women speaking in public, Anthony said: “Do you not see that so long as society says a woman is incompetent to be a lawyer, minister, or doctor, but has the ability to be a teacher, that every man of you who chooses this profession tacitly acknowledges that he has no more brains than a woman.”

Hats off to Susan B. Anthony, a crusader who dared to stand up for the justice and equality of the oppressed. Her courage serves as motivation for all women to rise to the challenge. Be a beacon in a world of impossibilities. Dare to change the world!

Spread the knowledge of women who dared on social media using the hash tag #Dare2BMe.