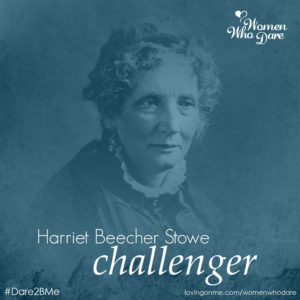 “I did not write it. God wrote it. I merely did his dictation.” – Harriet Beecher Stowe

It is rare that a book can ruffle the feathers of an entire nation, but author and campaigner for justice, Harriet Beecher Stowe, achieved just that. Her famous novel, “Uncle Tom’s Cabin”, which showed the evils of slavery and its devastating effects on African-Americans, flamed the fires of the debate about abolition and slavery, and sparked opposition in the South.

Born in Connecticut in 1811, Stowe, like many members of her family, championed to eliminate the oppressive system through writings and actions. Her parents were deeply religious and her father, a preacher, was known to speak his mind. One of her 12 siblings, Henry Ward Beecher, was a famous abolitionist.

In her youth, Stowe received an unconventional education, taking courses usually typical of males, including mathematics and the study of different languages. She moved to Cincinnati, Ohio when she was 21 and attended the school where her father had taken a position as president of Lane Theological Seminary. There, she met her future husband, Calvin Ellis Stowe, a professor, widower and opponent of slavery. The couple married in 1836 and together, they made their home a stop on the Underground Railroad, giving temporary food, shelter and protection to runaway slaves.

When in 1850, Congress passed the Fugitive Slave Law, prohibiting assistance to fugitives, Stowe took her cause to the pages of the weekly antislavery journal, National Era. She wrote her first installment of Uncle Tom’s Cabin in 1851. Her famous work was published in book form the next year and it sold 300,000 copies in less than a year, something unheard of during that time. The successful book gained her an invitation with President Abraham Lincoln in 1862, during which Stowe’s son later reported that Lincoln greeted her saying, “so you are the little woman who wrote the book that started this great war.”

After the Civil War, Stowe supported married women’s rights and felt that this issue shared many of the same characteristics of slavery:

“The position of a married woman … is, in many respects, precisely similar to that of the negro slave. She can make no contract and hold no property; whatever she inherits or earns becomes at that moment the property of her husband…. Though he acquired a fortune through her, or though she earn a fortune through her talents, he is the sole master of it, and she cannot draw a penny….In the English common law a married woman is nothing at all. She passes out of legal existence.”

Stowe was a true advocate of equality for all. In her later years, she created an integrated school in Mandarin, Florida for children and adults. This idea of equal education was unprecedented during the 1800s and her efforts set the foundation for integration more than 50 years ahead of its time.

Harriet Beecher Stowe was truly a woman who dared to change the world around her, challenging the very sensitive issues of slavery and women’s rights. We honor Stowe for her bravery, progressive ideas and advocacy for equality.

What challenge will YOU take on? Meet more women who dared in our Power 31 list.

And share the knowledge on social media using the hashtag #Dare2BMe.