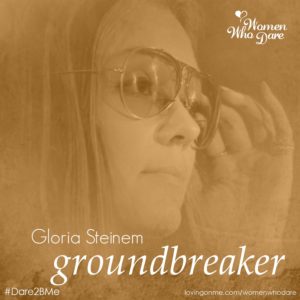 What hasn’t Gloria Steinem done in the name of feminism? She is the face of American feminism, championing the efforts of women’s social reform for decades and daring to defy the norm with no regrets!

Gloria Steinem was born in Toledo, Ohio in 1934. She had a rather peculiar childhood, living on the road in her father, Leo’s, trailer as he made a living as a traveling antiques dealer. When Steinem was three years old, her mother Ruth, then aged 34, had a “nervous breakdown”. This changed Gloria’s life path forever. Her mother’s mental health took a toll on the family as she spent long periods in and out of sanatoriums for the mentally disabled. Gloria’s parents separated in 1944, when she was 10. Her father went to California to find work, leaving Gloria and her mother behind in Toledo. It was Gloria’s first-hand witnessing of her mother’s challenges in trying to get help and find employment that led to her understanding of discrimination and the treatment of women in America.

After graduating from Smith College, Steinem made the advancement of women her mission. She fought to change laws that she believed oppressed women. Steinem campaigned for the Equal Rights Amendment, which aimed to eliminate many sexually discriminatory laws, such as those that gave men superior rights in marriage and denied women equal economic opportunities. Steinem led or was involved with just about every feminist or women’s group over the last 40 years, including the Women’s Action Alliance, the National Women’s Political Caucus, the Coalition of Labor Union Women, the Ms. Foundation for Women and Women’s Media Center.

In 1984, Steinem stood firm against the South African apartheid system and was arrested along with a number of protesting members of Congress. Her own personal experience with abortion at the age of 22 led her to become an advocate for reproductive rights. She recalled: “It [abortion] is supposed to make us a bad person. But I must say, I never felt that. I used to sit and try and figure out how old the child would be, trying to make myself feel guilty. But I never could! I think the person who said: ‘Honey, if men could get pregnant, abortion would be a sacrament’ was right. Speaking for myself, I knew it was the first time I had taken responsibility for my own life. I wasn’t going to let things happen to me. I was going to direct my life, and therefore it felt positive. But still, I didn’t tell anyone. Because I knew that out there it wasn’t [positive].” In 1992, Steinem co-founded Choice USA, a non-profit organization that mobilizes and provides ongoing support to a younger generation that lobbies for reproductive choice.

Steinem’s life achievements have not gone unrecognized. She was inducted into the National Women’s Hall of Fame in 1993, and received this country’s highest civilian honor, the Presidential Medal of Freedom, in 2013.

A woman for all women. Breast cancer survivor. A Woman Who Dared. Gloria Steinem.

What will be YOUR life mission? Need more inspiration? Follow our feature, Power 31: Women Who Dared to Defy the Status Quo, all this month.

And share with family and friends on social media using the hash tag #Dare2BMe.