Domestic violence has recently been cast into the national spotlight due to recent charges filed against NFL players, resulting in suspensions and terminated contracts. These events have also brought a lot of attention and public discussion to the issue of domestic violence.

However, domestic violence is far from a new topic of conversation, especially among women. This week, a friend of mine posted the following snapshot on Instagram: A marketing email from a country club (who’s name has been greyed out for protection) with the subject line “Beat your wife (at golf we mean)”. 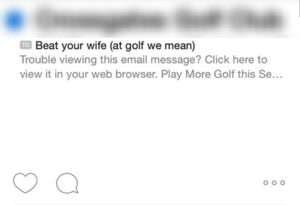 To say I was appalled and offended would be an understatement. Regardless of the hideous timing of this campaign, I didn’t find the implied message appropriate or funny in any context or situation. No, I’m not a customer at the golf club, nor will I ever be, but the message being distributed was in my opinion tasteless, damaging and wildly offensive to women in general.

Without a second thought, I got involved. I called and asked the manager to explain the email, and did the best I could to control my temper. His response to me was less than satisfactory. Meanwhile, a few colleagues in my office, men and women alike, had overheard the conversation and my frustration. “It’s just a joke.” And “Why do you care?” were a few remarks I received.

DOMESTIC VIOLENCE IS NOT A JOKE.

Why do I care? Because I will not be a bystander in perpetuating violence against women and families. We should all care and we should all care enough to speak up. Calling the country club and expressing my position and feelings to the management was not an option for me, but a duty. A duty to do the right thing. The subject of this email sends a message that is unacceptable and far from funny.

Later in the day, I received a note from my friend who’d originally posted the email. The country club had sent out a sincere apology addressing the issue at hand. In fact, they had received over 20 complaints from their customers and others regarding the email. This was extremely reassuring for me. As a society, we do speak up in the face of injustice.

Have you done your part today? Drop us a line and let us know how you are taking a stand. 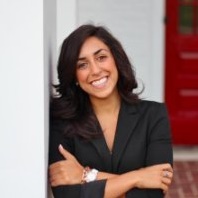 is a recent graduate from Juniata Colleges majoring in International Business Communication. During her young career she’s served as the keynote speaker for local American Association of University Women’s conferences and has placed as a finalist in a number of oratory competitions. She is passionate about raising her voice and inspiring social change through awareness and advocacy. Elise is a self-proclaimed uber-extrovert and loves traveling the world, meeting new people, and igniting deep meaningful conversations with strangers. Elise currently works at TE Connectivity in Berwyn, Pennsylvania as a change management specialist and also serves as a Global Inclusion & Diversity advocate at her company.