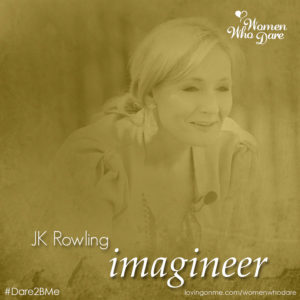 On a train from Manchester to London Joanne Rowling took her imagination for a wild ride. What returned with her was a world of witches and wizards, and the world was soon captivated under their spell.

Born in 1965 in Yates, England Joanne began writing at the age of 6. Her stories were fantastical, often including talking bunnies and bees. She continued writing stories throughout her life, including while attending the University of Exeter where she obtained a Bachelor of Arts degree. Following college she moved to London, working as a researcher and bilingual secretary for Amnesty International. It was during this period that Harry Potter came a calling.

The seven years following the first time she heard Harry’s voice would be difficult. The death of her mother, marriage, birth of her first child, divorce, and then a dive head first into poverty took Joanne to an all-time low. In 1993, she moved to Edinburgh to be near her sister Diane. In her suitcase were the first three chapters of Harry Potter. As a jobless single parent, Joanne was forced to survive living on state assistance. She felt like the worst kind of failure. Later reflecting on this period she remarked:

“Failure meant a stripping away of the inessential. I stopped pretending to myself that I was anything other than what I was, and began to direct all my energy to finishing the only work that mattered to me. Had I really succeeded at anything else, I might never have found the determination to succeed in the one area where I truly belonged. I was set free, because my greatest fear had been realized, and I was still alive, and I still had a daughter whom I adored, and I had an old typewriter, and a big idea. And so rock bottom became a solid foundation on which I rebuilt my life.”

Little did Joanne know she was even then on the cusp of her own “rags to riches” transformation. Upon completing “Harry Potter and the Philosopher’s Stone”, the books original title, it was accepted by a literary agent. Submitted to twelve publishing houses, it was rejected by them all. Finally in 1997, it was accepted by Bloomsbury and Joanne was given an advance of about $4,000. The only caveat was that it had to be published under a name that would appeal to young male readers. She chose J.K. Rowling, the “K” in honor of her grandmother Kathleen.

Over the next 10 years, 6 additional Harry Potter novels would be published, making J.K. Rowling the best-selling author in the UK. Her novels received worldwide acclaim and numerous awards, making her one of the wealthiest women in the world. Moreover, she’s largely credited for getting many kids (and their parents) reading again!

For allowing her imagination to run free, for boldly pursuing her dreams and never giving up we’re proud to add J.K. Rowling to our list of Women Who Dare.

So how about you – are you boldly pursuing your dreams? J.K. Rowling inspires us to keep going in spite of the circumstances. In the face of poverty, rejection, grief and depression she didn’t quit. Neither should we!

Shout it out loud and proud “I Dare to Be Me”! Now come on…let’s go get our happy ending.

PS – Don’t forget to share the inspiring stories of our Women Who Dare using the buttons below and hashtag #Dare2BMe.