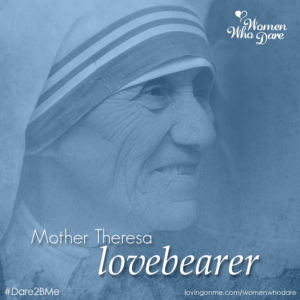 More than anyone else in recent history, Mother Teresa was the embodiment of God’s love here on earth. Her passion for caring for the “least of these” – the poor, sick, ostracized, and disenfranchised – is why we’re proud to call her a Woman Who Dared.

She was born Agnes Gonxha Bojaxhiu, in 1910 in Albania. Her father died when she was only 8 years old and Agnes became extremely close to her mother, a compassionate woman who instilled in her a deep sense of charity.

Although they were not wealthy, there was always an open invitation for the city’s destitute to dine with their family. When Agnes asked her mother who all the people were her mother responded, “some are our relations, but all of them are our people.”

Agnes first felt the call to a life dedicated to God at the age 12. By 18, she had set off to Ireland to become a nun. It was there she took the name Sister Mary Teresa. From there she traveled India, and three years later made her First Profession of Vows. Shortly after she was sent to Calcutta to teach at a high school which served children from the poorest families.

In 1937, she took her Final Profession of Vows and became known as Mother Teresa. Nearly a decade later God would call her a second time. While riding a train to a spiritual retreat she heard Christ say, “I want Indian Nuns, Missionaries of Charity, who would be my fire of love amongst the poor, the sick, the dying and the little children.”

There’s no question that Mother Teresa was one of the greatest humanitarians of the 20th century. Her unwavering commitment to aiding the poorest of the poor was fueled by an overflowing heart of love. We salute her for faith to answer the call, her bravery in going where others would not dare, and her vision of a world where everyone has value and worth.

Have you said yes to what God is calling you to do? We sure hope so! The world needs more love-bearers like Mother Teresa.

PS – Be sure to share her inspiring story with the buttons below using the hashtag #Dare2BMe.