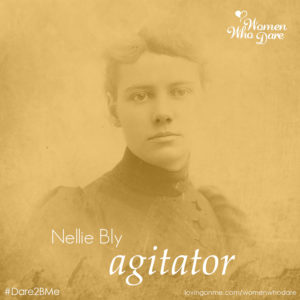 Nellie Bly was a pioneer in the field of investigative journalism. She lived by the motto “Energy Rightly Applied Can Accomplish Anything.”

Born Elizabeth Jane Cochran in 1864, her original plan was to become a teacher. However, after her father died unexpectedly, her family’s financial hardships forced her to drop out of school.

While helping her mother run their boarding house in Pittsburgh she came across an editorial entitled “What Girls are Good For” in the local paper. The article chastised women for trying to get an education or have a career. Instead, they were to stay “close to home”.

Of course that infuriated young Elizabeth who quickly shot off a reply signing it “Little Orphan Girl”. The paper’s editor was so impressed that he placed an ad asking Little Orphan Girl to visit the newspaper. When Elizabeth came in, the editor offered her the opportunity to write a rebuttal to the original article. She went home and wrote her first newspaper article. Impressed again, the editor offered her a full-time job under the pen name Nellie Bly, named after the popular song by Steven Foster.

Nellie immediately began shaking things up. You see, most women that wrote for newspapers during that time wrote about gardening and fashion. But not Nellie. She tackled tough issues like unfair divorce proceedings for women, the plight of the poor and oppressed, and the everyday lives of women working in local factories.

Well, that didn’t sit well with local business men, who threatened to pull their advertising. As a result, the paper assigned Nellie a gardening story, and when she turned it in, she also turned in her resignation.

Nellie would go on to live a life of great adventure. She spent six months traveling Mexico before eventually coming back to the U.S. and eventually settling in New York City. After numerous rejections from major dailies, Nellie was finally given an opportunity by New York World. She was to go undercover as a patient in the notorious asylum, Bellevue.

She managed to convince both judges and doctors that she was insane so that she would be committed. For 10 days, Nellie endured filthy conditions, rotten food and physical abuse from doctors and nurses before being rescued. Her subsequent articles, “Behind Asylum Bars” and “Inside the Mad House”, caused an uproar in New York, spurring investigations and eventually significant increases in funding and protocol for how the mentally ill were treated.

Nellie would go on to do additional undercover work, exposing crooked politicians and blowing the lid off poor working conditions in factories. She also continued indulging her adventurous spirit. In 1889, she set off alone to travel around the world, determined to break the record established by fictitious character Phileas Fogg in Around the World in Eighty Days. Wouldn’t you know it – she finished in 72!

Nellie  talked about the things that made us uncomfortable, and continued to agitate beyond the story to affect change. She embraced adventure and always believed that if you set your mind to it, it can be done.

For her bravery, courage and trailblazing spirit we salute Nellie Bly as a Woman Who Dared! What will her story inspire you to fight for?