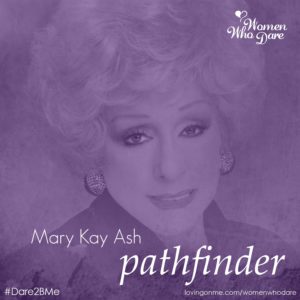 “God didn’t have time to create a nobody – just a somebody. I believe that each of us has God-given talents within us waiting to be brought into fruition.”-Mary Kay Ash

Mary Kay Ash was a pioneer for female entrepreneurs and undoubtedly transformed the cosmetics industry. She built a successful beauty empire with the belief in her quote above, establishing a system for women of all ages and races to empower themselves.

Born in Hot Wells, Texas Mary Kathlyn Wagner was a natural saleswoman. She got her start at the age of 17, selling books door-to-door to support her three sons while her husband, J. Ben Rogers, served in World War II. The couple divorced shortly after Rogers returned home. She was married three times, lastly to Mel Ash, in 1966.

The entrepreneur honed her skills from years of working in the sales industry. Like many women during that time, Ash trained several of the new employees. During her career, her trainees were promoted and given raises, which left Ash frustrated. Not one to sit idly by, Ash decided to go out on her own. She intended to write a book helping women in business, but the guide would not come to fruition at that time. Instead, the book morphed into a business plan and the rest is history.

At the age of 45, with the initial investment of $5,000, Mary Kay opened the doors of her first storefront in Dallas in 1963. Operating under the motto “God first, family second and career third”, Ash led her company by this philosophy, turning a profit in its first year and selling close to $1 million in products by the end of its second year. She created a system encouraging her employees to reach for their highest goals, offering initiatives for meeting those accomplishments. The infamous pink Cadillac was the highest reward for Mary Kay consultants.

Ash died of a stroke in November 2001. At her death,  Mary Kay Cosmetics had over 800,000 representatives in 37 countries, with total annual sales over $200 million. As of 2008, Mary Kay Cosmetics has more than 1.7 million consultants worldwide and wholesale volume in excess of $2.2 billion.

Mary Kay Ash is revered by her employees, women in business and women all over the world for her life work. And we salute her as a leader, visionary and inspiration.

Don’t miss the rest of our series, Power 31: Women Who Dared to Defy the Status Quo. Check back each day for new profiles of inspiring women.

And share the knowledge with friends using the hashtag #Dare2BMe.